Being a really poor fella I have the most doubtful honor of installing Windows 2000 on a machine with very recent hardware. Can you imagine the most profound problems I have encountered and will encounter during the installation?

On the other hand you most certainly might ask, why in seven hells I want to install this old OS on this great new hardware?

The answer to this question is rather simple: The software for the electron microscope in our lab is a pain in the ass during a fresh clean install. According to service personel from the suppliying company this software installation might take 2 full days.

First I did the obvious thing to do: backup the existing Windows 2000 installation from the old computer using CloneZilla [1] instead of Norton Ghost that was in use for over 10 years on this machine. Then I installed all the official and unofficial Serive Packs [2] and did another backup in order to restore that one to the new SSD hard disk.

At this point I ran in to the first problems. The old drive had 80GB, but the SSD only 64GB. So doing a trivial CloneZilla restore was impossible.  I had to restore the CloneZilla image to a file on our group server, that I could mount by calling [3]:

Having mounted the image I finally could copy all the files to the physical hard drive. 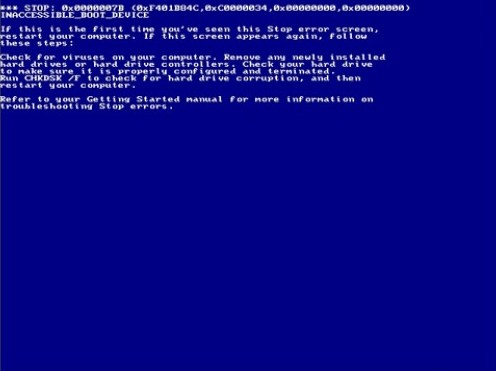 As we all might know Windows does not like to be migrated to new hardware, which means we have to re-install (aka repair) the Win2k installation on the new machine. Otherwise the machine will abort the boot process with an "Inaccessible Boot Device" blue screen.

And at this point I ran right into the next problem. As Win2k is so old, that it does even know the meaning of SATA, it is expecting drivers on a floppy drive, which this computer will never have due to the lack of a floppy controller on the board. So using the standard Win2k CD will also result in an "Inaccessible Boot Device" blue screen.

The only way to get the drivers for the new hardware into the installer except by means of a floppy disk is to mess around with the installer CD. Luckily I found this rather recent forum post [4-6] describing how to do the messing around. Following the instructions, which included damn slow downloads and an antivirus warning, I finally ended up with a Win2k CD that included not only "recent" generic drivers, but also the drivers for the actual hardware.

Booting from this CD the installer managed not to show the well known "Inaccessible Boot Device" blue screen, but was actually loading the new drivers. You think, this would have been good news, right?

Think again! The installer was complaining about a driver (iastor.sys) to be corrupted!

After doing some googling i found out, that ICHx (x>7) is not and will never be supported in Win2k [7], and that this driver was only neccessary when I wanted my SATA drives to support hot plug. So, it was time to do some digging in the pile of Windows 2000 CD I was burning the last day to find one without this fracking driver.

Surprisingly, the installer was rather happy and allowed me to proceed, but not with the step I intended. My intention was to repair the Windows 2000 installation from the old PC. But the installer did not recognize the copy. Installation of a brand new system is not an option; in this case I also could have installed WinXP or something more recent.